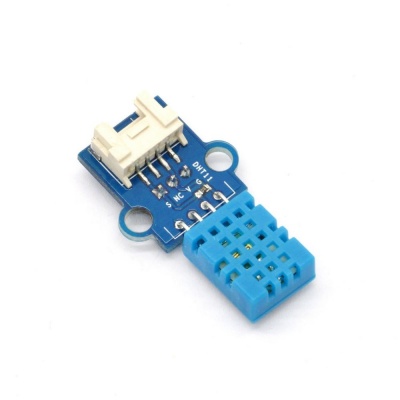 1. Plug and play, easy to use. Compatible with the mainstream 2.54 interfaces and 4-Pin Grove interfaces in the market.

2. With use of M4 standard fixed holes, compatible with M4-standard kits such as Lego and Makeblock.

Note 1: S for digital input/output port, V and G for voltage at the common collector and ground respectively

Single-bus data format is used for communication and synchronization between MCU and DHT11 sensor. One communication process is about 4ms. Data consists of decimal and integral parts, and the specific format will be described below. Current decimal part is for future expansion which is read as zero now. The operation process is as below: a complete data transmission is 40bit, and the sensor sends higher data bit first.

1. Communication process is shown in the following diagram

When the bus is at low level, it indicates that DHT11 sent a response signal, after which, pull up the bus for 80us. When sending data, every bit of data begins with the 50us low-voltage-level and the length of the following high-voltage-level signal determines whether data bit is "0" or "1". Format is shown in the following diagram. If the response signal read is high level, DHT11 will not respond, please check the cable connections.After last bit of data is transmitted, DHT11 will pull down bus for 50us, then bus will be pulled up by pull-up resistor into free status.

2. Signal indication of data 0 is shown in the following diagram.

3. Signal indication of data 1 is shown in the following diagram.